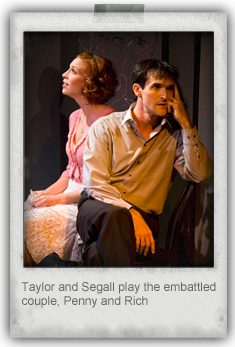 Divorce! The Musical is a new musical comedy examining the institution of divorce (and marriage) in America today. This 90-minute musical begins with the wedding of Penny and Rich and ends in typical American fashion: a divorce after just four years. As their marriage unravels, denial, deception, and raw outrage collide with greedy lawyers, dramatically inclined family members and mountains of paperwork. From “Divorce! The Musical” to “I’m Living in My Parents Basement and My Friends Forgot My Name” to the realization that each will only be left with “Half,” Divorce! The Musical shows us that getting married is a whole lot easier than getting divorced.

The original Los Angeles production (under the title Divorce! The Musical) won six Los Angeles theatrical awards including the Los Angeles Ovation Award for Best Book, Music, and Lyrics of an Original Musical, having been nominated against two large-scale Broadway shows: 9-5 (Dolly Parton) and Minsky’s (Charles Strouse). The production received 15 rave reviews including the Los Angeles Times Critic’s Choice, Backstage Critic’s Pick, and LA Weekly ‘GO!’ and was featured on All Things Considered, Entertainment Tonight, and in The Boston Globe, Divorce Magazine, and Playbill. The show ran for over 5 months and received three extensions.

What the Critics Say! “Kamler’s lyrics are funny as all get-out and perceptive as well… The show is first-rate all the way.”
-Steven Stanley, Stage Scene LA

“A rollicking crowd-pleaser!”
-The Tolucan Times

“Every divorce should be this fun.”
– Ophelia Chong, KCET